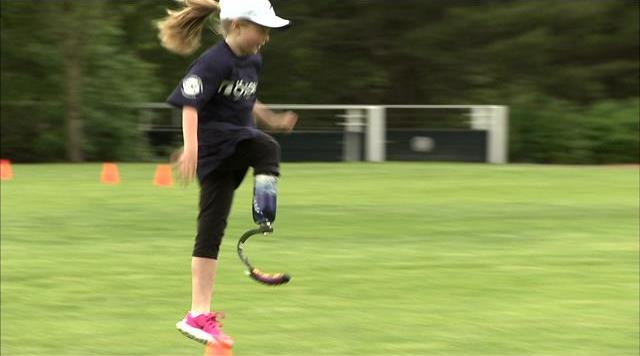 Our inspirational person of the month is 8 year old Lauren of Spanaway, Washington. Lauren was born with PFFD (Proximal femoral focal deficiency), a congenital defect in which variable portions of the superior end of the femur are reduced or absent. Due to this condition her parents decided amputation was the best choice at 14 months old and she received her first prosthesis at 16 months.

Lauren recently received a new running flex leg during the Ossur Nike event last March. Among the attendees was Sara Reinertsen, an American paratriathlete, Ironman triathlete and former Paralympic track athlete. In 2005, Sarah became the first female to complete the Ironman Triathlon using a prosthetic leg. She was also born with the same condition as Lauren (PFFD).

During this event Nike fitted Lauren with the new Nike Sole. A break though in running technology for Amputees. The new Nike Sole is a lightweight, durable composite sole that can easily be used with Össur’s Flex-Run prosthetic blade for amputee athletes.

Now that she is older Lauren is able to do all the things other kids do and more. Some of her favorite things are skating, soccer and cheerleading and much more!

Lauren has big plans with her new leg, and plans to do more of her new favorite sport, roller skating. Check out the video below to learn more about Lauren’s story.

If you are interested in attending a similar event, Spectrum O&P is putting on a Prosthetic Performance Clinic on April 16. For more information click here.